Prof. Mahadevan is the Lola England de Valpine Professor of Applied Mathematics, Professor of Organismic and Evolutionary Biology, and Professor of Physics, Harvard university.   Before arriving at Harvard in 2003, he was the first Schlumberger Professor of Complex Physical Systems in the Department of Applied Mathematics and Theoretical Physics at Cambridge University, and a Fellow of Trinity College. Among his awards are a 2009 MacArthur “genius” grant, a John Simon Guggenheim Memorial Fellowship, MIT’s Harold Edgerton Award, Harvard’s George Ledlie Prize, and named lectures and professorships at the Universities of Oxford, Cambridge, Ecole Normale Superieure, Chicago, Brown, University of California-Berkeley, among others. 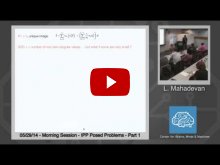