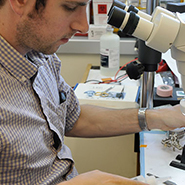 Understanding the development of intelligence in a human infant is a key project of CBMM. This project engages the fundamental tradeoff between nature and nurture, or priors and data, and ultimately the origin of priors—how constraints are selected by evolution, encoded in genes, and instantiated in genetically wired brain circuits.

This project also represents a novel developmental approach to building human-like artificial intelligence systems and comprehensive computational models of human cognitive architecture. Instead of branching out from a single area of adult human intelligence, we start with an integrated cognitive model of multiple core capacities in the young child’s mind, along with a set of developmental or learning mechanisms for scaling up to an adult model.

This thrust represents a novel developmental approach to building human-like artificial intelligence systems and comprehensive computational models of human cognitive architecture. We start with an integrated cognitive model of multiple core capacities in the young child’s mind, along with a set of developmental or learning mechanisms for scaling up to an adult model. We build on the last two decades of research in cognitive development, which suggests that even young infants have powerful knowledge of the physical and social worlds – an intuitive physics of objects and their dynamics, and an intuitive psychology of intentional agents, social groups and roles, and moral behavior - along with the beginnings of abstract symbolic thought.

The goal of this thrust is to characterize in more precise computational terms the content of these systems of knowledge, and how they arise through mechanisms of learning and development.

Our empirical work consists of two phases. The first phase maps out timelines for the development of knowledge over the first two years of life, focusing on physical and psychological reasoning. The second phase focuses on designing new behavioral experiments with infants to test distinctive model predictions. Our experiments use standard looking-time and reaching methods. We also anticipate using novel methods with the potential to generate richer quantitative data on behavior and neural substrates, including computer-based eye-gaze tracking and near infrared spectroscopy (NIRS).

We model infants’ intuitive psychology, intuitive physics, and language as forms of causal inference: infants build (implicit) probabilistic models of the causal structure in the world that gives rise to the data observed, and their behavior can be explained in terms of approximate Bayesian inference to the causes that best explain the data.

We focus on a class of probabilistic models known as probabilistic programs, which allow us to model the development of infants’ knowledge and reasoning by combining ideas from hierarchical Bayesian learning, program induction, inductive logic programming, and stochastic search. Probabilistic programs also have natural sampling-based semantics, suggesting inference mechanisms that are computationally efficient as well as cognitively and biologically plausible.

The project of reverse engineering infant cognition dovetails closely with other Research Thrusts established at the Center. This project is a principal motivation for the Theoretical Frameworks for Intelligence Research Thrust, which focuses in part on developing computational methods of hierarchical Bayesian learning and probabilistic programs. The problems of scene understanding to be studied here, closely parallel those studied in integrative adult cognition in the Vision and Language Research Thrust, but with simpler stimuli that are more readily studied in infants. Our study of the infant’s intuitive physics in the context of tracking and predicting the trajectories of objects in motion can ultimately be grounded in some of the best-understood neural circuits for statistical inference and motion analysis (Circuits for Intelligence Research Thrust). Our sampling-based inference algorithms correspond with known potential neural mechanisms. Our emphasis on understanding how infants understand the mental states of intentional agents from observing their behavior parallels the nonverbal social perception side of the Social Intelligence Research Thrust.

View all Development of Intelligence publications >