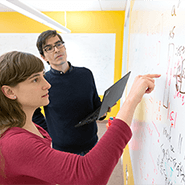 Understanding intelligence and the brain requires theories at different levels, including the biophysics of single neurons, algorithms and circuits, overall computations and behavior, and a theory of learning. Advances have been made in many of these areas from multiple perspectives in the past few decades. In fact several major contributors to these advances are members of our team.

This theoretical foundation provides a common framework for fields as diverse as computer science, cognitive science, and neuroscience. Recent successes in intelligent systems applications – from Google to Watson – would not have been possible without these developments. For the first time, we have the beginnings of a unifying and useful mathematics of brains, minds, and machines with rigorous foundations, demonstrated applicability in almost every area of cognitive and neural science, and real practical value for building intelligent systems.

The core CBMM challenge provides a critical focus for the diversity of theoretical approaches. The models for answering the sets of questions in the challenge will need to encompass behavior, macro circuitry and individual neural circuits. They will need to be plausible and testable at all these levels.

The theory platform will connect all these levels: for instance face identification algorithms to answer the question “who is there” should perform well but also be consistent with known fMRI and primate physiology. In general the theory platform will inform the algorithms that will be implemented within Vision and Language which will take the lead on the engineering side.  The modeling and algorithm development will be guided by scientific concerns, incorporating constraints and findings from our work in cognitive development (Development of Intelligence), human cognitive neuroscience (Social Intelligence), and systems neuroscience (Vision and Language).

A core mathematics of intelligence comprising learning, inference, and neural computation that has emerged in the past few years will provide the tools for the theory platform.

Neural Computation comprises several complementary modeling approaches that have been developed to link intelligent behavior and the brain mechanisms underlying it (Rao & Ballard 1999). Work is planned on neural circuits that may implement probabilistic inference (including representations of constraints and priors) [Beck et al., 2011; Beck et al., 2008; Burak et al., 2010).  We will also investigate a recent theory that attempts to explain and predict cortical architecture and properties of neurons in different visual areas (Poggio, 2011).