Marc Raibert became Director of Robotics at Google when Google acquired Boston Dynamics in 2013. Raibert founded Boston Dynamics in 1992 as a spin-off from MIT. Boston Dynamics develops some of the world’s most advanced dynamic robots, such as BigDog, Atlas, Cheetah, SandFlea and Spot. These robots are inspired by the remarkable ability of animals to move with agility, mobility, dexterity and speed. A key ingredient of these robots is their dynamic behavior, which contributes to their effectiveness in real-world tasks and their life-like qualities. Before starting Boston Dynamics, Raibert was Professor of Electrical Engineering and Computer Science at MIT from 1986 to 1995. Before that he was Associate Professor of Computer Science and Robotics Institute at Carnegie Mellon from 1980 to 1986. While at CMU and MIT Raibert founded the Leg Laboratory, a lab that helped establish the scientific basis for highly dynamic robots. Raibert has been a member of the National Academy of Engineering since 2008. 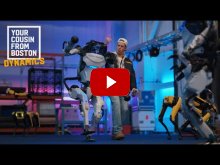