To find out which sights specific neurons in monkeys "like" best, researchers designed an algorithm, called XDREAM, that generated images that made neurons fire more than any natural images the researchers tested. As the images evolved, they started to look like distorted versions of real-world stimuli. The work appears May 2 in the journal Cell.

"When given this tool, cells began to increase their firing rate beyond levels we have seen before, even with normal images pre-selected to elicit the highest firing rates," explains co-first author Carlos Ponce, then a post-doctoral fellow in the laboratory of senior author Margaret Livingstone at Harvard Medical School and now a faculty member at Washington University in St. Louis.

"What started to emerge during each experiment were pictures that were reminiscent of shapes in the world but were not actual objects in the world," he says. "We were seeing something that was more like the language cells use with each other."

Researchers have known that neurons in the visual cortex of primate brains respond to complex images, like faces, and that most neurons are quite selective in their image preference. Earlier studies on neuronal preference used many natural images to see which images caused neurons to fire most. However, this approach is limited by the fact that one cannot present all possible images to understand what exactly will best stimulate the cell...

Read the full article on the EurekAlert! website using the link below. 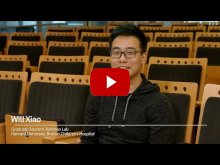