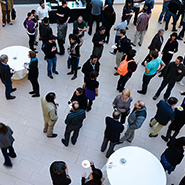 Social cognition is at the core of human intelligence. It is through social interactions that we learn. We believe that social interactions drove much of the evolution of the human brain. Indeed, the neural machinery of social cognition comprises a substantial proportion of the brain. The greatest feats of the human intellect are often the product not of individual brains, but people working together in social groups. Thus, intelligence simply cannot be understood without understanding social cognition. Yet we have no theory or even taxonomy of social intelligence, and little understanding of the underlying brain mechanisms, their development, or the computations they perform. Here we bring developmental, computational, and cognitive neuroscience approaches to bear on a newly tractable component of social intelligence: nonverbal social perception (NVSP), which is the ability to discern rich multidimensional social information from a few seconds of a silent video.

The human superior temporal sulcus (STS) has been implicated in a broad range of social perceptual and cognitive processes, including the perception of faces, biological motion, and vocal sounds, and the understanding of language and mental states. However, little is known about the overall functional organization of these responses. Does the STS contain distinct, specialized regions for processing different types of social information? Or is cortex in the STS largely multifunctional, with each region engaged in multiple different computations?  Because prior work has largely studied these processes independently, this question remains unanswered. Here, we first identify distinct functional subregions of the STS, and then examine their response to a broad range of social stimuli.

Our results point to several functionally specific STS subregions, including a region in the right temporo-parietal junction that responded specifically to abstract mental state content; a region of posterior STS that responded specifically to dynamic human motion, and a region of middle STS that responded specifically to vocal sounds.  The face-responsive region of posterior STS also had a strong response to vocal sounds, indicating that this is not a face-specific region as previously described, and should be reconceptualized as an audiovisual region processing dynamic audio and visual information from others’ faces.  These results provide a foundational understanding of the functional organization of the superior temporal sulcus, and pave the way for subsequent studies that will probe the functional role of STS subregions in further detail.